The Wiki for Tale 7 is in read-only mode and is available for archival and reference purposes only. Please visit the current Tale 10 Wiki in the meantime.

From ATITD7
Jump to navigationJump to search

Some users are reporting a glitch where the ground does not render properly, like in these pictures: 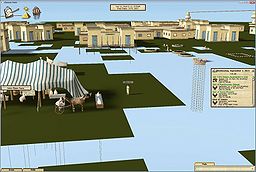 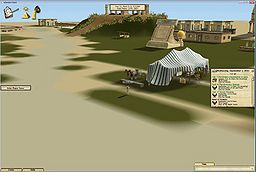 In summary, nVidia 3D settings need to be changed to always use nVidia for eclient.exe - a walkthrough can be found at howtogeek.com.

In case anybody is using a laptop with built in Intel HD graphics you need to modify the properties of the atitd shortcut and add -noats to the target line (Thanks Pluribus). This will revert your terrain textures back to the old T1 visuals but at least they display correctly - Rhaom

ORIGINAL POST [Sun-Aj] Do we have anyone else playing the game from Windows 10? I tried to log in a few times, but the ground graphics are all messed up - there is absolutely no texture to anything (only blobs of color), and at some angles everything just goes blue. Compared to when everything worked fine, the only change for my computer was updating windows from 8 to 10. Tried both T6 and the beta, same problem in both. Re-installing the game showed me the texture for a few seconds, but it went away after some files updated themselves.

I tried using both cards for ATTID before and after upgrading my drivers to what my computer's manufacturer had posted on their support site as "drivers for Windows 10"; I'm still getting the same result with both cards and in both Fullscreen and Windowe modes.<photo removed>

September 2 at 12:58pm · Edited · Like [Sun-Aj] Same spot as above (RP CS in T6), different angle. <photo removed> September 2 at 12:58pm · Edited · Like Pluribus Are both of these screen shots under Windows 10? Never mind I see that NEITHER is texturing properly... Can you restart the client get fully logged in, then quit. Email me ([email protected]) a copy of the egenesis.bug file that is located in the eGenesis directory BEFORE you restart the client. That is most definitely a driver issue, but how to fix it... Do you have a driver setting program that you can FORCE it to use the Nvidia card? Your system is reporting that is using only the Intel graphics driver... (Which is ancient by Intels standards, but you are stuck with the laptop vendors driver because of the EVIL hybrid driver machines) September 1 at 10:23pm · Like · 1 Pluribus The best directions that I can find is to open NVidia Control Panel and force eclient.exe run on the NVidia graphics card. If you do not find an eclient profile there, you will have create a new one. Note for those who havent encountered these before: Some laptops pair an intel video chipset AND an Nvidia/ATI chipset in the same box and use the lower power Intel chip for 2D graphics and the other card for 3D... problems with that are 2 fold... 1) they arent perfect in their detection and frequently can mess up which card to use and 2) They are custom drivers that prevent you from updating to the chip makers current driver. You MUST use the laptop vendors driver. They actually have no incentive to update the driver once the laptop is sold and so generally will do the least work possible to keep it running. September 1 at 10:38pm · Like · 1 [Sun-Aj] Thank you for all the help! After a lot of troubleshooting I decided to try Nvidia's own recommended driver. Io and behold, everything looks great now. As for Lenovo, I don't even... <photo removed> September 2 at 1:37pm · Edited · Like · 3 User W September 9 at 9:47am · Like User I just a hint, there is still flying gras like i see..... wink emoticon September 9 at 9:51am · Like User W My wife and I are having the same problem on our brand new Windows 10 HP Spectre x360 ultrabooks - they do not have a dedicated video card, and instead just have an Intel HD 5500 video driver - which is up to date.

Any ideas for us? I can post more technical information if anyone has any ideas. September 9 at 10:09am · Edited · Like User W I just updated all the drivers listed on HP's support website. I'm still looking straight through the world at some angles, and seeing blobs of green from other angles. (I can see little white dots down there at night time! I wonder if they are stars. Or gold veins.) September 9 at 10:31am · Like · 1 User L Post as much information as you can. Its unlikely Pluribus will find time today, right before the start of T7, but you never know. It's worth posting. Plus there are quite a few system wizards here too. September 9 at 10:46am · Like · 1

The problem with it is. the game doesn't utilize the graphic card/s 100% and usually idles between 0 and 30%. On a laptop it is configured to run at maximum power savings. hints the blury textures, as it auto set texture to really low. You will have to configure your computer to run in high preformance mode and disable switching for the game. also try running the game in a diffrent mode. create a shortcut to your eclient.exe and put -d3d at the end. It is not that pretty and the light features do not work but it might help with loading everything up. Its the mode i used on my oldass laptop w/o a graphics card and played it flawlessly.

I was able to fix this by going into the NVIDIA Control Panel, 3D settings and setting up an application profile for eclient.exe set to always use NVIDIA. See [1].

07/02/2016 - I had a problem where the egenisis.log filled my full Drive, but only on my laptop. I reset it, and started getting errors again. When I looked, they were the same as above. My grounds was all black and blocky. I did the fix, restarted the game, NO MORE errors, and it runs smooth now. There was no issue at all with my 2 desktops.---Viracocha

02/18/17 - Windows 10 Laptop core i5 - I had the same problem above where the roads were rendering as big blue squares. The laptop has the two graphics processors: Intel and NVIDIA GTX950M. Driver 378.49. Force program to use NVIDIA GPU and there are all kinds of choices in the control panel. It would be helpful if you could tell us what the different graphics card settings should be set to - for example I turned Antialiasing FXAA to OFF and Anisotropic Filtering to OFF and now I can read the text again...which is good, but the game still does not have the beautiful graphics I have come to love. I can screenshot and send you the settings choices for the Control Panel...Also, whenever I click on the hollow box to expand the ATITD screen to fill my laptop screen? The program freezes and I have to do a hard restart of the computer.