From ATITD6
< User:Dunagain
Jump to navigationJump to search

Read the Wood Treatment Guide to understand the basics, and why the K-Values are important.

Using VT to determine your K-Values

There is a new macro in VeggieTales named wttt_k_values which has been designed to help you determine the K-Values of your Wood Treatment Tank.

To use it, pin your Wood Treatment Tank window, and the Treat With... window on its side so it won't interfer with the reading on values, then load a single board into the tank. 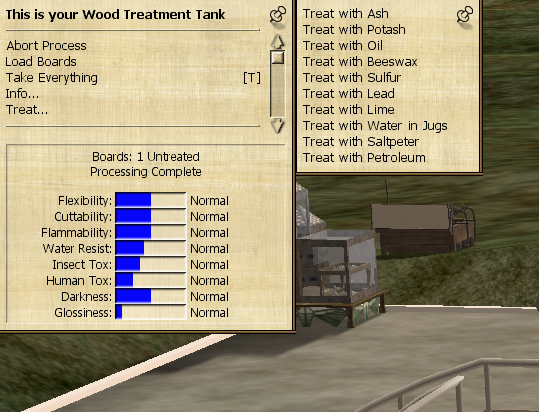 Then you start VT and select the script wttt_k_values.lua, press Shift after clicking into the ATITD window. 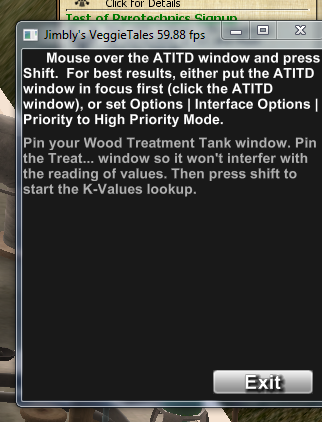 VT will display this screen: 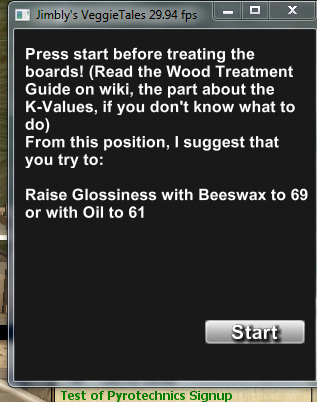 From there you can follow the suggestion which is to raise glossiness to 69 with beeswax (this is explained in detail in the Wood Treatment Guide so I won't elaborate).

Before you add any beeswax, press the Start button then watch the values and add beeswax until Glossiness reaches 69. Keep track of the number of seconds used by the tank. An accuracy of 10 seconds should produce acceptable results (you don't have to add beeswax by 1 second steps!). 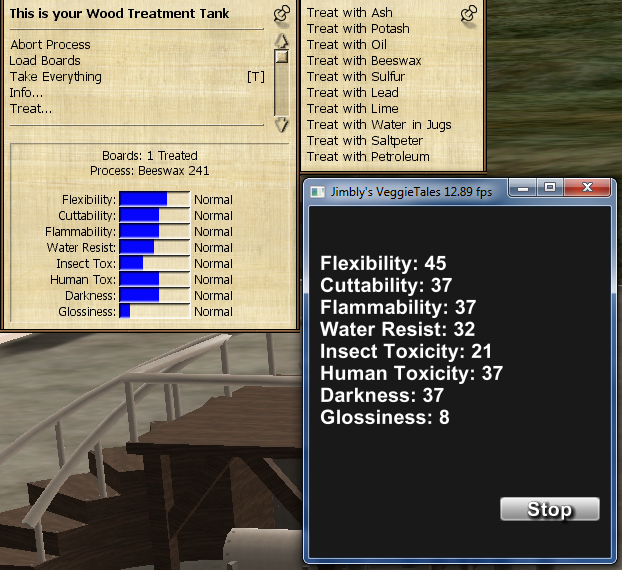 When the Glossiness hits 69 it is time to press stop and tell the macro how many seconds did it take (seconds used by the tank, not real seconds). After which since you have watched Glossiness press the relevant button and the K-Value for Glossiness will be displayed. After pressing the button Again you will receive new suggestions and can find the other K-Values.

Using WoodPlaner to determine your recipes

WoodPlaner is an utility that will help you find a treated boards recipe. Before using it you will have to input the kvalues of your tank, either directly (the third box) or by entering the difference and the time used (both the K-Values and the formula are displayed by the VT script).

For instance if you want the recipe for Rotproof Termite-Resitant boards, which does not use petroleum, uncheck the Petroleum checkbox, select RotProof and Termite-Resistant in the combo boxes then press start, you should get something like that (values will vary depending on the K-Values of your tank). 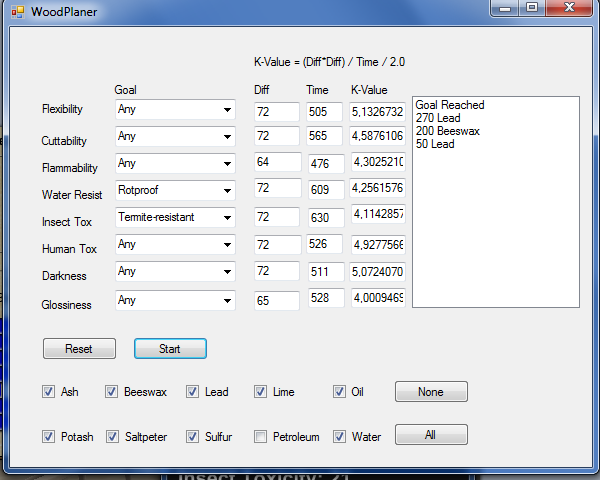