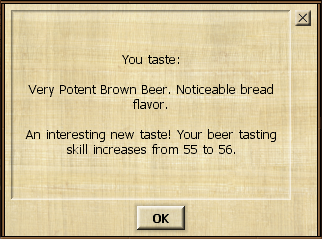 When you drink a beer, you will be told whether you receive a point in Beer Tasting. It is believed that new and unfamiliar flavor combinations -- and even changes in other qualities such as color -- increase the chance of gaining a point. There appears to be a random factor involved as well, but on the whole, sampling a variety of beers seems the best way to gain Beer Tasting points.

It is possible to get more than one BT point from multiple sips of the same beer (provided there is enough beer to go around -- please be respectful of your host and fellow drinkers!), up to three has been seen. Often you get the first BT point from the first sip, but it might as well come on the eighth. The same mug can be used for all sips, they all seem identical.