Information from Tale 4 is shown below and has not, apparently, changed.

Barley is one of the staple crops of Egypt. Harvested raw, it can be cooked in a Grain Oven to make roasted barley (light, medium, dark or burnt). It can be turned into Malt (raw), and the malt can itself be cooked similarly. Malted barley is a primary ingredient in Beer.

Once you have harvested 1000 barley, you become eligible to grow barley as one of your Offline Chores. (To get credit, you do not need to have been the person who planted the field -- just the one who harvested.)

Barley is grown using Barley (Raw), water, Grain Fertilizer and Weed Killer, and requires you to know the Barley Cultivation technology. New citizens may obtain a starter packet of 4 raw barley from any University of Worship where Barley Cultivation has been unlocked.

NOTE: Weed killer is not strictly necessary for growing barley, and some cultivation strategies ignore it.

Plant a barley patch on grassy terrain. Barley patches have controls to add water, fertilizer, and weed killer, and meters indicating the current level of each.

Barley may be harvested at any time.

NOTE: A barley patch which is "Ready for Harvest" will die 20 minutes later if left unharvested.

As barley grows, it is subject to attack by three varieties of weed. These appear randomly and, when present, prevent a barley field from reaching maturity. More than one type of weed may be present simultaneously. A field with weeds can be harvested, but the barley yield is less than one without.

Weeds thrive and remain in a field until killed. Unlike flax weeds, barley weeds cannot simply be yanked out of the ground; they must be made to die off by manipulating the level of water, fertilizer, and weedkiller in the field.

If your goal is to grow a barley field to completion, you will devote a lot of time to fighting weeds. Occasionally a lucky field will make it to maturity without a single weed, but these are rare. More often you will have to watch your barley closely and manage the levels in order to keep your barley healthy, while cutting back on those ingredients that feed the weeds. A field may suffer multiple weed attacks before it reaches maturity. Patience and a good supply of weedkiller are required of the devoted barley farmer.

(Hekatef's Observation: Although we know how to treat weeds once they appear, there is no way to prevent them that I know of. Weed appearances seem to be entirely random, with no controllable factors making them more or less frequent. They will happily sprout up in a field already full of weedkiller. They do not seem to "spread", so having weeds in one field will not affect adjacent fields. I know of no ecological affects that influence the appearance of weeds. In other words, forget about trying to prevent weeds, and just deal with them as the inevitable random force they are. If anyone should discover a reliable method to prevent weeds, discussion is warmly encouraged!)

I like to run 4 barley fields at a time -- that's as many as I can fit on the screen simultaneously while still zoomed in enough to spot weeds. (It used to be 3 before I got a widescreen monitor.)

I start a field by adding 1 water and 1 fertilizer right away. At all times, for as long as there are no weeds to worry about, I keep a field at max water and fertilizer (or just a smidgen below max). This keeps the field progressing quickly toward "Ready to Harvest" status.

I keep a very close eye out for weeds and treat them as soon as they appear. I don't skimp on the weedkiller -- if it's needed, then I keep weedkiller at max (or a smidgen below max) for as long as it takes for the weed(s) to die. I stop water and/or fertilizer, as needed, while keeping the other ingredient maxed out; that way the barley can stay as nourished as possible in the meantime. Sometimes a field is hit with multiple weeds simultaneously, and at these times there's nothing to do but max out weedkiller, withhold water and fertilizer, and wait -- the barley will suffer a little, but once the weeds are gone you'll be able to make up for lost time.

All in all, at the end of a session of barley harvesting, I find I've used fertilizer and weedkiller in more or less equal amounts.

Stay observant! Sometimes weeds are very small and hard to see. Zoom in and move the camera a bit if you're not sure. Also, a weed infestation can consist of more than one plant: just because you see one weed fade away, it doesn't mean you've eradicated all of them. Don't start adding water/fertilizer again until you're positive the field is free of weeds that thrive on it.

For those Egyptians who find weedkiller to be a bit difficult or costly to obtain in large quantities, I recommend the following method. It uses some fertilizer, very little weedkiller -- and lots of water!

To start out, plant as many barley fields as you feel you can run comfortably. (I run four; ymmv.) Fill their water to maximum. Give them each a pulse of fertilizer.

Every tick, fill the water back to maximum. Growing near a water source helps so you don't have to run for more all the time. Keep water maxed at all times and in all circumstances; don't even think about it.

Add fertilizer only if it goes below half, and only if the bed is totally weed-free. Don't fill it up too high; just one pulse is plenty.

Weeds will invariably show up. Here's how you deal with them:

Once you've killed off all of the thorny and green/white weeds, add some fertilizer -- not too much, though, as before. Continue to keep the water at full.

Using this method, about half of your beds should max out, the ones you harvest early will often produce 3-5 barley, and you'll end up using very little weedkiller.

Plant the barley, immediately add 1 water and 1 fertilizer. Add 1 of each every other tick, and if weeds appear, immediately harvest the bed and plant a new one. While you won't get many grown to full harvest, this usually ends up netting about 4-5 barley per field.

(Augma's method) I wanted to make things as simple as possible for myself in the face of barley's randomness. Each time the water and fertilizer level moves down, I call this one "tick". I use about 100 fertilizer and harvest well over 100 barley (net) in about an hour. If you plant more than 1 barley at a time clearly you can make more efficient use of your time.

DO NOT harvest as soon as you see a weed and try not to get frustrated if you see more weeds appear as you continue. Wait until the 5th tick! The yield will almost always be better if you wait. If the only weed you have is the spindly brown kind, you can make a judgment call whether to continue growing (and just adding water) rather than harvesting prematurely. Very rarely those weeds go away and the barley grows to a complete harvest.

It is possible to raise barley (albeit slowly) with no fertilizer or weedkiller. Simply plant the barley field, water it to the max level, and keep it fully watered. Ignore any weeds that appear. When you see the number of stalks increase, harvest. You should end up with 2 barley per field (net gain of 1 raw barley) if there are weeds, or 3 barley if weed-free.

I would like to add that when a new stalk appears, water once more, then harvest on the next water drop, This gives the new stalk a chance to grow. I harvested as soon as a new stalk appeared and only got back 1 barley, so there seems to be a small time requirement for growth. Despite weeds you will get 2 barley. (Euripedus)

This method yields about 85% to 95% completed fields, at 10 barley per field (or more after Worship test passes). You do not need to watch for weeds on most fields, if at all. It uses Weed Killer and Grain Fertilizer, but the expense is definitely worth it if you are growing in bulk.

This info is confirmed for T6. Most fields will be ready to harvest in 5-7 minutes. Some stragglers may take 10 minutes or longer.

Running eight fields requires lots of clicking. Some people here may have the skill to run more, and some less, but eight is comfortable for me. Plant fast; max out those bars fast; pin the windows fast...then you can relax and do steps 3-5 above at a slightly easier pace.

You may want to start with four fields at first to get the timing down, then gradually ramp up to a comfortable number of fields. --Bobophet 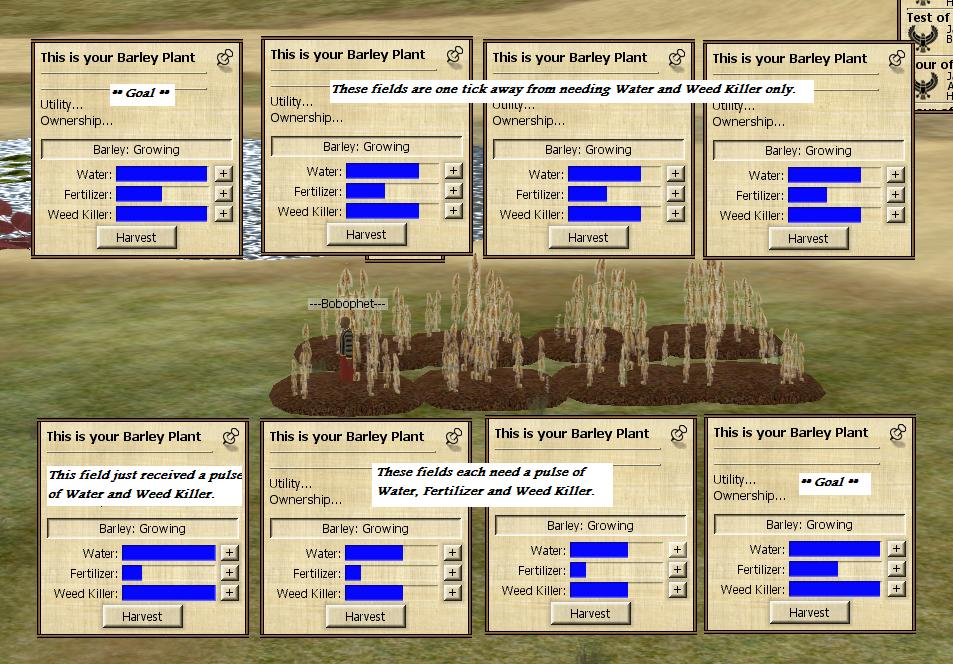