A gene is a basic physical unit of heredity. A gene in ATITD is named as a color. A correlaton might be in human DNA where there are 4 bases, adenine, cytosine, guanine, thymine. Each gene color is abbreviated to one letter for ease of use but DO NOT get color genes confused with gene sets that make colors in flowers. Example: Yellow or Y

A gene set is one or more genes in a specific sequence that controls a plant's physical characteristics. Example: Green Orange Orange Orange or GOOO which colors an outer petal of a lily one shade of magenta

Gene sets can overlap in a genome. Example: A Sea Lily genome might have these genes ROYGYOR which will have active gene sets of ROYG (giant gene set) and GYOR (dwarf gene set). The overlap is on the G.

Gene sets in Orchids and Sand Blooms might contain spacer genes that do nothing at all except isolate gene sets from the overlap like shown above. Example: In a Sand Bloom genome you might have YGYUY. YGYUY would have active gene sets (from overlaps) of: YG yellow right outer petal) GY (yellow left outer petal) YU (yellow lower inner petal) UY (yellow upper inner petal) where G and Y U are all involved in overlaps.

Now if you add a couple of 'C' spacer genes to that Sand Bloom genome like so...YGCYCUY...you only have active gene sets of: YG (yellow right outer petal) UY (yellow upper inner petal) where the two C genes do nothing and the middle Y gene is now useless because it cannot complete any gene set.

One or more genes or gene sets form a linear sequence we will call a genome. Example: Vampire Sea Lily genome KIYIYIOIYIOIOK

Genes and their abbreviations:

Note: Ending/beginning 'Black' or 'K' genome delimiter is not technically counted as part of the functioning genome. Think of it more like parenthesis around the genome. Example: Vampire Sea Lily (IYIYIOIYIOIO) = KIUIUIOIUIOIOK

The picture below gives an example of using a Crystal Solvent on the Frivolity vine. A Crystal Solvent yields a six gene string when used on plants to see parts of their genomes. See below for a link on solvents. 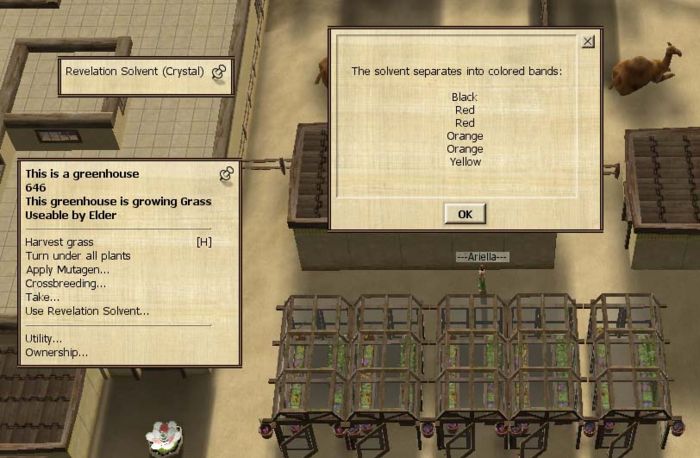 What is possible with atitd genetics? There are 125 possible color choices for flowers. Below are 60 of those choices ranging from the color white which is 0 Cyan shades 0 Magenta shades 0 Yellow shades to combining two of the primary colors up to shade 4 each. 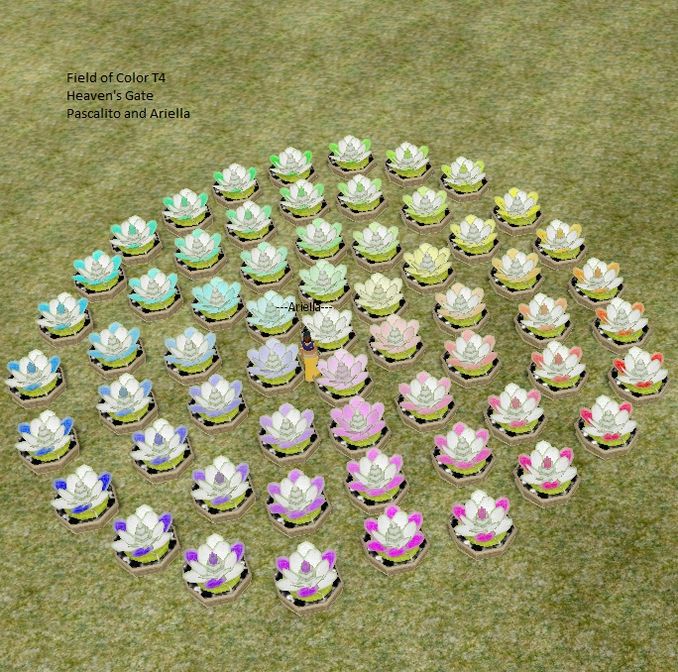 And another 'little' example. Size does matter! A giantx15 Sea Lily, a giantx9 Rose of Ra and Sand Bloom peeking out of the camel pen. 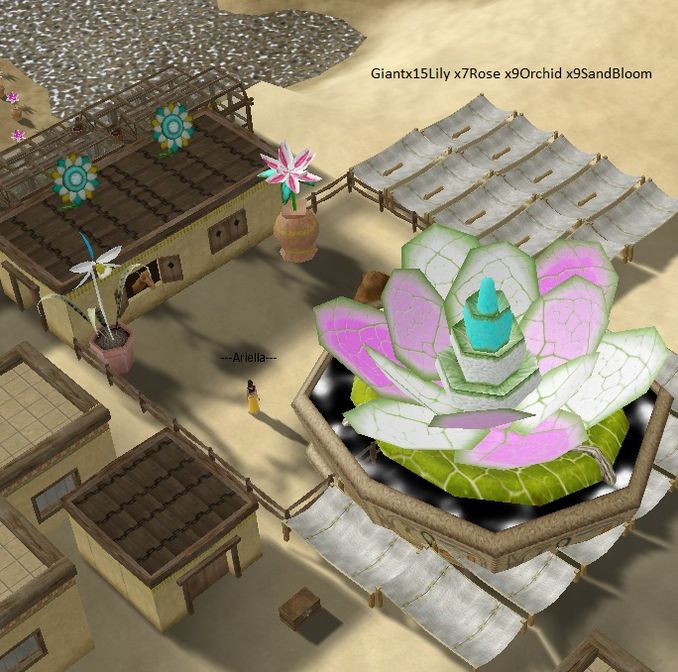 Please use these links in listed order. Understanding genetics builds on a graduated set of learning blocks.