This building becomes available after you have learned the Advanced Chemistry tech.

Raeli Tiles that are named "light grey" have been confirmed as being recognised as "grayish" for this building. 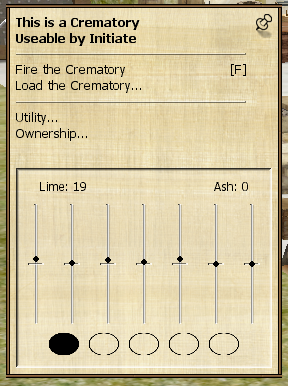 The crematory is operated the same as in T3, and the T3 wiki has a very comprehensive explanation for how it works. But briefly:

It is far far easier to run the crematory with a partner than to try to solo it. Each partner takes one of the double slider buttons and then either 1 or 2 of the remaining buttons. It's much more relaxed to have one pair of sliders to balance, and then 1 or 2 others to keep central, especially when you are learning to use a new crematory.

in my experience it averages out around 18-19 ash and 9-10 lime per run over large batches, but can vary very much per run. Ive had runs were I got only 4 ash and 0 lime and others with 19 lime and 29 ash. I think Doc Saintly was very lucky with those results -Mudkest